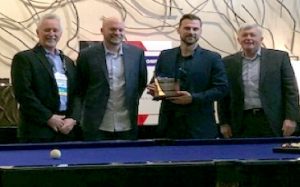 IRVINE, CA —( March 7, 2018) CPS (Consumer Portfolio Services, Irvine, CA) announced their 2017 auction award winners in a private ceremony at the CAR conference on 3/7/18. “We are extremely proud to honor our top performing auctions each year through the auction award/recognition program,” said Mike Scott, Remarketing Manager for CPS. Scott went on to add, “For the 2017 awards, we saw some familiar faces at the ceremony along with many auctions earning their first CPS award. The competition the program creates for the auctions is terrific and to watch the auctions compete throughout the year, inquiring about how they stack up to their competition, is a testament to the commitment these auction have to the success of CPS in the remarketing world.”

This year’s CPS Top Gun Award (Auction of the Year) was awarded to 166 Auto Auction from Springfield, MO. To qualify for this award, the auction must finish the year in the top 5 for large CPS volume sales in retention, then go through the voting process of the entire internal and external CPS remarketing teams. CPS became partners with 166 AA in late 2014 and since then, 166 AA has gone on to receive the Operational Excellence Award in 2015 and the CPS Heavy Hammer Award in 2016 prior to earning the 2017 CPS Top Gun Award. Ace Tetlow, AGM at 166 AA, went on to say, “The team at 166 Auto Auction is honored to receive this award and grateful for the partnership we have with CPS, truly a great company to partner with at the auction level.”

The 2017 CPS Heavy Hammer Award (Highest Sales Retention) went to KCI -Kansas City Independent Auto Auction, Kansas City, MO. The Heavy Hammer Award is awarded to one CPS partner auction in the nation who achieved the highest sales retention for the entire year. This was KCI’s 1st CPS auction award after coming extremely close on many other occasions. Jennifer L was quoted, “It’s an honor for our KCI team to achieve this award from CPS.  All year long, we’re discussing and implementing ways to continue to build the best market for CPS vehicles, and we have obviously set the bar high.”

The 2017 CPS Top Gun Award for a low CPS volume sale went to Dealers Auto Auction of the Rockies from Denver, CO. This award, as a mirror to the CPS Top Gun Award, takes all aspects of the auction’s performance into consideration. The winning auction must finish in the top 5 for a low CPS volume auction in sales retention, then the internal and external CPS remarketing teams vote for the auction they deem did the best job in 2017. “Even with having a lower volume at this sale, DAAR put their best foot forward throughout the year and designated the appropriate resources to the CPS account, maintaining solid customer service to compliment the strong retention in the lanes.” said Mike Scott. This was DAAR’s 1st CPS Auction Award. Michele Noblit, EVP at DAAR was quoted “We are very honored to accept this award. We appreciate the recognition of all our hard work and efforts. The guidance from Mike and his staff has and continues to be superior.”

The 2017 CPS Online Sales Award and Operational Excellence Award were both claimed by Rawls Auto Auction from Leesville, SC. The Online Sales Award is a straight statistical award for selling the highest percentage of vehicles through online channels. Rawls AA was able to sell over 30% of the CPS inventory via an online channel, besting their closest competition by over 5%. The Operational Excellence Award (Best Fleet/Lease Dept.) was also awarded to Rawls AA after all votes were calculated. All large volume CPS sales are eligible for both the Online Sales awards and Operational Excellence awards. “CPS is a true auction partner making it a pleasure for my team to service their account.”  commented Kelly Cagle, Rawls Fleet Lease Manager

“The pride and commitment to excellence from Kelly and her fleet lease team is outstanding.  To be recognized nationally in Rawls Auto Auction’s record setting 80th year of business is exciting.  We’ve adapted to change throughout the years, and to outperform our auction chain competitors utilizing technology and customer service is extremely satisfying.” said auction owner and general manager, Jimmy Rawls.

The awards were the first CPS awards for Rawls AA.