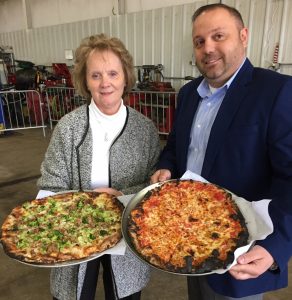 Auto industry veteran Peter Saldamarco opened the facility in on Feb. 26, 2006, after spending nearly four decades in the auto industry. The anniversary sale also heralded the opening of a brand new fourth lane to the fast-growing auction.

Vehicles were bought up faster than the pizza slices disappeared. The sale ran more than 450 units, and had 366 active buyers in the lanes.

Attendees were treated to the best pizza New Haven has to offer.

“We played up the pizza when we promoted the sale,” Saldamarco said. “New Haven is the pizza capital of the world, so we try to take advantage of that!And it turns out, New Haven, CT was indeed named the best pizza in America! Google it!”

Saldamarco said he was very proud of the sale, and that he believes quality overshadows quantity. He added that this philosophy is evident not only in the quality of the vehicles offered, but in the integrity with which the staff at Central Auto Auction operates.

“We are very much hands on with our consignors and buyers,” he said. “We are an extension of their team, their staff essentially. We have the best auction employees in the business, and with our new full-service vehicle evaluation and enhancement center, there’s nothing we can’t handle for our customers.”