In a ceremony prior the start of its April 25, 2018, sale, Columbus Fair Auto Auction (CFAA) was awarded Ally Financial’s Auction of the Year Leadership Award for 2017. The award recognizes the auctions overall sales, performance, and growth for the year. This marks the third year in a row that CFAA has earned the award. 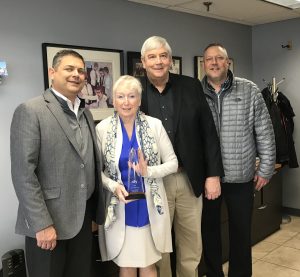 “Ally Financial appreciates the hard work and effort the Columbus Fair team does on our behalf,” said Tom Moore, Ally’s Director Remarketing-Eastern Region. “This continues to be a great partnership for Ally and its dealer customers and the results speak for themselves with Columbus Fair having won this award three years running.”

“We value our relationship with Ally both commercial lease and repo,” said Alexis Jacobs, Owner of Columbus Fair Auto Auction. “We are proud of the recognition and we look forward to continued success in 2018 and beyond.”