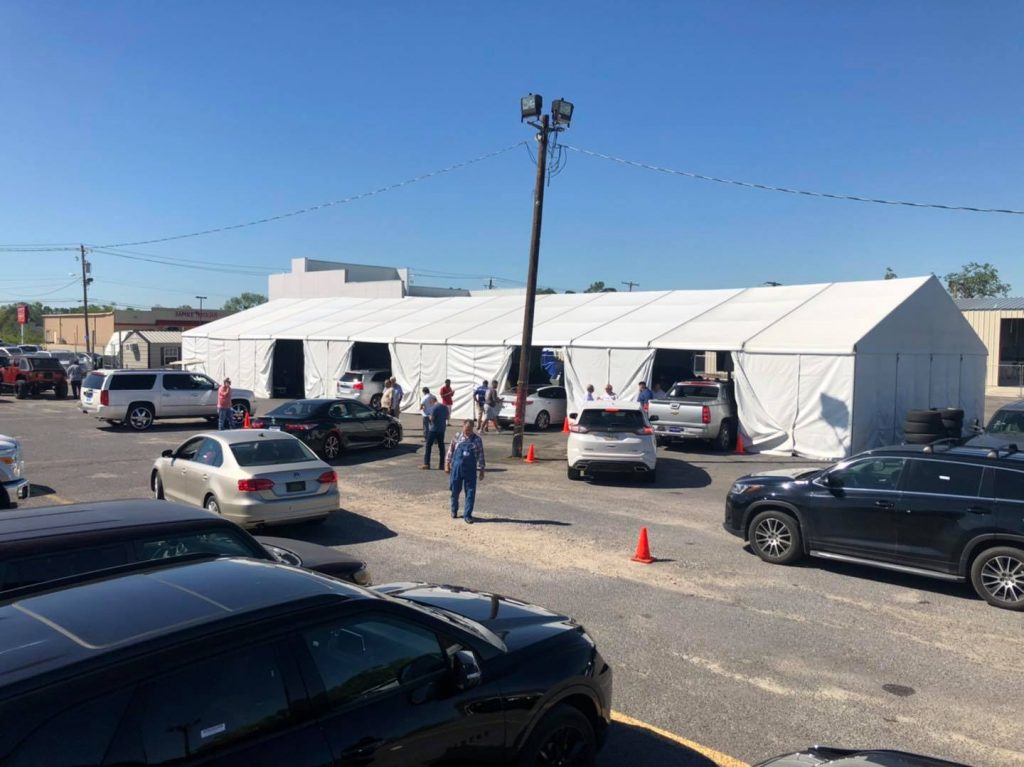 LAKE CHARLES, La. — If necessity is the “mother of invention,” then adversity is its father.

The one-two-three punches of a global pandemic together with an unprecedented economic recession, coupled with not one, but two, natural disasters has forced Matt Pedersen, owner of Lake Charles Auto Auction in Lake Charles, La., to think outside the boxes.

In this case the boxes included the two-year-old office building and surrounding auction barn and ancillary buildings left destroyed or severely damaged by Hurricane Laura, a Category 4 storm that ravaged Southwest Louisiana and much of the state on Aug. 26, 2020.

“Our metal detail shop was simply gone,” said Pederson, whose father Mike opened the auction that sits on a 9.5 acre property in 1991. “There was literally nothing left. We found no evidence of the building on the property.”

One of the strongest storms to hit the continental U.S. in decades, Laura packed 149 mph winds and lashed the region for hours. All 11 of the auction barn’s bay doors were destroyed, “just ripped in half.”

“Everything inside the auction barn was destroyed or severely damaged, and every awning, lean-to on outbuildings, or anything like that was simply gone. We consolidated all the vehicles marshaled on our property in preparation for the storm, but still 90 percent had broken windows, dents, scratches or all three.”

Pedersen, said his first thoughts went out to his family and his employees.  Luckily, damage to his nearby home and those of relatives and employees received comparatively less damage than that at the four-lane auction facility.

Business had been a challenge already given the COVID-19 pandemic and the economic crisis throughout the country. There were challenges in finding masks and gloves for employees and auction-goers, cleaning supplies and disinfectants. Then there was a downturn in demand, followed by a lack of quality inventory.

Pedersen adapted like other auction owners across the country with hybrid in-person/online sales. The auction sells online using Edge Pipeline and as dealers purchased more vehicles from farther away, there was an increased demand for vehicle transport. Still, the auction that refers to itself as “Louisiana’s Frontline Leader,” was able to overcome those challenges, and continues to move 350-450 vehicles a week.

“It was a struggle, but we were able to adapt quickly to changing market conditions,” Pedersen said. “My father’s wealth of experience helped tremendously, and, of course, the dedication of our employees to just get things done right the first time, and always pay attention to the needs of our buyers and sellers paid dividends as well.”

The auction was closed for repairs and restructuring for just three weeks following the August hurricane. Pedersen rented a tent that currently serves as the auction lanes.

With power returning slowing in the region, getting the auction back online took some time. With power back, the tent and new procedures in place, chanting could once again be heard at Lake Charles Auto Auction.

Then it was time to prepare for the auction’s annual Anniversary Sale held every year in October. Pedersen had 5,000 flyers printed and mailed for its 29th Anniversary Sale, located extra inventory to run, and purchased prizes for raffles and giveaways. Everything was set, until — Hurricane Delta struck Lake Charles on Oct. 9, as a Category 2 storm packing winds of 100 mph, and causing widespread flooding in Lake Charles and throughout Southwest Louisiana.

“The storm didn’t have the winds that Laura had, but the flooding was worse,” Pedersen said. “We didn’t sustain much more damage, but piles of debris that had lined our streets became projectiles and made things a mess.”

Once again the auction had to shutter, but this time only for a week. Pedersen said the outpouring of support from auction owners, dealers, trade associations, and friends has been tremendous.

“One dealer sent us a check for $1,000,” Pedersen said. “It was amazing. A nearby auction we compete with every week for inventory and dealers sent us a check. An auction sent over employees who set up a kitchen and cooked for our employees and nearby residents.”

Reconstruction and repairs are ongoing at the auction, and we are still running cars through the tent, but spirits are high and consignment remains strong.

“After Laura hit, we worked hard at getting the auction back up and running, but we didn’t forget about our fellow residents,” he said. “We had cleared up debris, and our property offered the perfect place for a food distribution center.”

“We had lines of cars picking up food and ice for hours on end. It was gratifying, but it really hit home when a good friend of mine drove through and when he spotted me, he rolled down the window to say, ‘Hi.’ I thought, ‘This is really bad.’ But we are able to see the light at the end of the tunnel now.”

“Consignment volume is down about 50 units a week from the same period in 2019,” Pedersen said, but given all the challenges, he’ll take that for now as he looks to build up inventory. Like auctions across the country, prices skyrocketed as the economy opened up in early and mid-summer, but those pressures have alleviated somewhat as the market has returned to more normal levels.

“The factory shutdowns and supply chain issues hit the manufacturers hard, so there just wasn’t the new car sales,” he said. “Pretty much, every new car store became a used car dealer, and if they did sell a new vehicle they kept the trade.”

Pedersen said that “What doesn’t kill you, makes you stronger,” is absolutely true. He said he’s wiser from what he experienced and will have contingencies for storms and pandemics in the future.

“I don’t want to have to put those into place ever again, but we’ll be stronger and more prepared if it happens again.”